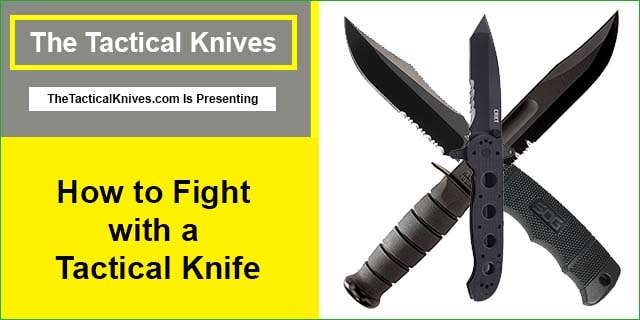 Knives are essential tools used for a variety of activities by almost every individual. However, one of the most underrated uses of a knife is as a weapon. This is because people commonly stray away from them and this particular use out of fear of hurting themselves or others.

While this is an understandable fear, it can be detrimental in situations where they may need to protect themselves but are unaware of the basic safe use practices needed when using a knife.

It is important for any individual to learn how to safely weaponize knives to hone their fear and turn it into a way to defend themselves and help themselves feel protected.

By the end of this article, I will have hopefully taught you not only how to correctly fight with a tactical knife, but in what scenarios you may need to use it and how you may use this skill to benefit yourself and those around you.

What Is a Tactical Knife?

A tactical knife is no ordinary knife. A knife is considered a tactical knife when it has a perfect size, a strong blade with an ergonomic handle attached to it, commonly used for outdoor activities and combat purposes.

Tactical knives are the best types of knives to fight with. They are handy, easy to use, easy to hide, and can be as lethal as a weapon. Because of their small size, flexibility, and multitasking features, you can use them in a number of situations to disarm an opponent in varying ways suited to your style.

Tactical knives typically have a non-glare or non-reflective blade, but this is not necessarily restrictive. The blade also can be fully, partially, or non-serrated.

Their handles are commonly made out of synthetic materials to maintain strength and durability. They can sometimes also contain groves, palm swells, grip patterns, or textures that the finger can easily slide into in order to prevent them from slipping out of one’s hand.

Which Type of Tactical Knife Is Right for You?

When purchasing the best tactical knife, it is important to note that there is no single knife that will fit the liking of every person and that you must be meticulous when making this decision.

1. Tactical Folding Knife: Based on its name, folding knives are knives that fold in on themselves. They tend to be smaller and as a result, are easy to conceal and convenient to carry.

They come in the most diverse types — mainly, they can be single-bladed, double-bladed, smooth, or serrated. However, they are a bit more difficult to clean and can break off easily in knife fighting, so this is something you should take into consideration.

I would recommend you buy a spring assisted tactical folding knife.

2. Tactical Fixed Blade Knife: Meanwhile, fixed knives are knives wherein the blade is fixed with its handle. The blade is able to rely on the handle and therefore has a stronger output when used.

Because of this, they are sturdy and do not easily break. They are also easier to clean and maintain. Most importantly, when buying you should choose the best fixed blade full tang knife.

A full tang fixed blade tactical knife is a type of knife wherein the blade is one single piece of metal extending into the handle butt. This is one of the sturdiest knife types and tends to last the owner long as it is usually made with high-quality metal.

Moreover, as opposed to knives whose handle and blade are separately connected, full tang knives will never become loose or break off.

3. Tactical Switchblade or Automatic Knife: Finally, a switchblade is a type of knife where the blade is opened through a forcing mechanism or a spring operation made by design. Like the folding knife, they are lightweight and easy to carry around.

Measurement: After choosing which type of tactical knife you want to use, you must now decide what specific knife to use based on its size.

Overall, deciding what type of tactical knife to use is mainly up to the proportions of your hand, your fighting style, and ultimately, your personal preference.

Knife Laws: However, it is also important to take note of the laws regarding carrying knives in your area as some places may not permit the carrying of knives in public places and private establishments if they are of a certain length or are concealed.

When Should You Use a Tactical Knife?

Learning how to use a tactical knife can greatly help you defend yourself against robbers, other criminals, or generally in situations you may feel threatened in.

For example, if there is someone rather close to you provoking an altercation with a close combat weapon, tactical knives are a must to respond to this situation.

Furthermore, if someone ever wants to harm your family members, don’t waste a single moment, buy any of the top fighting knives quickly. Then train yourself as well as family members if possible for self-defense.

However, you should choose not to brandish your knife unless absolutely necessary, especially when your attacker is unarmed, as this is not only illegal otherwise, but can end up hurting innocent individuals as well.

When you use your knife fighting skills, it should not be to kill someone but rather as a self-defense technique that keeps attackers away.

How to Start a Fight with a Tactical Knife?

Before beginning to fight with a tactical knife, it is best to practice with a similarly-sized or shaped object, such as a practice knife, rubber training knife, wood knife, or even a marker, in order to avoid possibly hurting yourself or others around you while you are still untrained.

To get started with using a tactical knife, you must first learn how to take it out. When drawing your knife, ensure that it is pointed away from you. You can do this by storing your knife on the reverse side of the body as your dominant hand, which also allows you to take out your knife efficiently.

You should also note that it may be difficult to do this with folding knives as drawing them can be a bit slow, so make sure to have a knife that can flip open quickly.

How to Hold Your Tactical Knife?

The second step to starting knife fighting is to hold the knife correctly. So you must also learn how to hold your knife’s handle properly. Although there are many different gripping styles in knife fighting, two types are very popular.

Forward Grips: You can opt for the forward grip, where you hold your knife out by the grip with your fingers wrapped fully around the handle and the tip of the blade is pointed out from you, towards the sky. This is an attacking style and is best suited for new fighters.

Reverse Grips: The reverse grip, where the blade is pointing down on the ground. It is a defensive style mainly used by professional fighters.

How Do You Fight with a Tactical Knife?

Now that you know how to properly hold and handle a tactical knife as explained in the previous point, it is just as important to practice your fighting stance.

You must always keep your whole body behind the knife and hold it out in front of you. This way, the knife is able to act as a protective gear for your head, neck, chest, and torso.

When doing this, keep your body as tiny as possible by taking your shoulders in and tucking in your head, and avoid extending your knife arm all the way as this will leave you vulnerable to being attacked.

Secondly, learn to use your knife as a distraction. In most cases, especially if you are being mugged, the perpetrator does not actually want to start a knife fight and is likely to step down when threatened with a similar weapon.

However, in the worst case that the attacker still chooses to instigate a fight, you must learn to parry their attacks.

You can dodge their attacks by stepping 90 degrees to the outside of your striking arm, then use your other hand to grab their elbow and try to disarm them. Use your knife to strike or block their arm.

You should also learn to move around, especially to your left and right, and always stay mobile if you are being struck.

Generally, your main goal throughout the fight should be to disarm them, not to severely injure them, as this is more likely to deescalate the situation and prevent anyone from getting hurt further.

Attempt to slash at their striking arm so they can drop their knife and you can escape. If they slash at your lower torso, take a big step to the side, point your knife down on their striking forearm, and slash down with your blade at the wrist.

If they attempt to slash high, do the same and take a step to the side, but instead slash with your blade pointing up at the underside of their forearm and aim towards their wrist. If done correctly, they are likely to drop their knife and you can win the fight.

Finally, whatever happens during the fight, never let go of or even throw your knife. If you are untrained, you are likely to miss your attacker entirely and end up without a weapon for the rest of the fight. Keep your tactical knife close to you at all times.

What Is the Role of Knife Maintenance in Knife Fighting?

You cannot properly fight with a tactical knife if you are unable to take care of it and make sure it stays sharp and clean.

Allowing your knife to become dull will not only decrease your performance when fighting with it but can sometimes make it more dangerous when handling it.

On the other hand, just by seeing a sharp and clean knife in your hand, the opponent will understand that you use the knife regularly or that you are a skilled knife user. Moreover, in many cases, it may play an important role in psychologically weakening your opponent.

Generally, knives don’t have to be cleaned every day, but they must be cleaned after every use and you must do some maintenance cleaning every few months if it hasn’t been used in that period of time.

You can read some of my articles on knife maintenance.

After purchasing a knife you should buy some of the respective cleaning equipment needed to keep your particular knife in its best shape. You should also consider purchasing a home knife sharpening system for regular sharpening of all types of knives or household sharp tools.

By now, I hope you have realized that tactical knives are nothing to fear and can become a powerful tool or defensive weapon in the right hands.

Fighting with a tactical knife is not a barbaric practice as commonly believed but rather, a methodical and skilled pursuit that can be used by many to get out of a sticky situation.