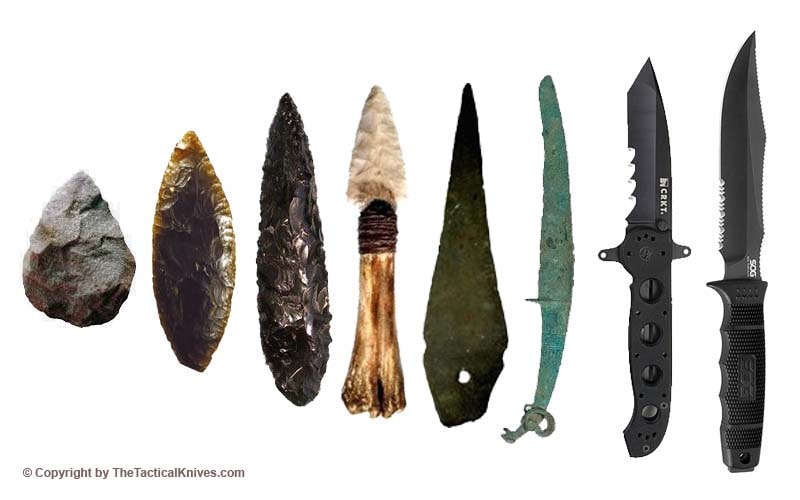 Bob Terzuola coined the term ‘tactical folder’ in the 1990s, but the essence of the tactical knife existed long before Mr. Terzuola popularized the term and the liner lock style of the knife. The tactical knife can trace its genesis to combat and various armies of the world.

The first knife, it was issued by the Marine Corps was a bayonet. This knife has an obvious drawback and the Marine Corps realizing the impracticality of the bayonet’s everyday use, issued an open assist, tanto blade, Benchmade knife. This was a very beginning tactical knife that filled the gap. Now they had a utility tool that fits well in the hand and could easily be operated with a single hand. The Marine Corps did not reach the decision to issue such a knife overnight or in a vacuum. U.S. and German militaries were issued similar fixed blade knives and folding knives during World War II. These knives would enjoy popularity amongst troops and would be brought back state-side for every day carries.

Since then, other companies, whose primary focus was game hunting and not warfare, have crafted a wide array of tactical knives. Many of those knives were formerly marketed as hunting knives. Likewise, fixed blade knife companies will often market a fighting knife or utility knife, or tactical knife to the public with little to no distinction between them. Therefore, it is up to the consumer to stay apprised of the variants and qualities of the various brands and styles.

In 1979, the Al Mar Knife Company was the first to design and produce a perfect tactical knife. The Al Mar Knife Company sought advice and enter from Special Forces Colonel James N. Rowe. The company then released its new knife model, the SERE, which was geared toward military use. Enter in the 1990s. The tactical knife saw an explosion with the newly coined phrase, ‘tactical folder.’ In the United States, many of these knives ranged between 3 and 4 inches, due to states’ laws. However, the blade lengths diverge between 3 and 8 inches. With custom knife makers, like Bob Terzuola, manufacturing the newest thing in knife technology, the tactical folder, demand for the knives skyrocketed.

Day by day the demand for these knives was rapidly increasing. Since then, various knife production companies such as Buck Knives, Spyderco, Benchmade, Cool Steel, KA-BAR Knives, Kershaw Knives, SOG Specialty Knives, Al Mar Knives, and Gerber Legendary Blades have begun making and mass-producing the tactical folder. Those companies who lacked designers in the tactical folder realm, sought outside help. They either contracted designs or directly hired designers to engage in this endeavor. Feeling the push from larger manufacturers, several of the smaller custom companies that helped launch the tactical folder revolution stuck out to mass-produce their designs under their name and logo.

From the genesis of the folding tactical knife to the boom of production companies, the knife was pigeonholed. Many sought the knife as too short for any truly tactical purpose, which they defined as the combat knife. They pointed to the short length and the need to retrieve and open the knife before a defense could be mounted. Unfortunately, many of these critics missed the point.

The Revolution of Tactical Knife

The tactical knife was not made to kill the enemy. The knife was made to aid you in daily work, such as cutting rope or rigging. The U.S. Navy used the Buck Model 110, Folding Hunter, for this exact purpose long before Mr. Terzuola named the style. Since then, the U.S. Military as a whole has embraced the idea of a tactical knife, specifically a tactical folder. Tactical folders can be found in nearly every pocket of every military member in today’s U.S. Armed Forces.

Realizing the need for wide utility, the U.S. Military, and more specifically the U.S. Marine Corps, will allow a service member, of certain units, to choose what brand and what style of knife they are issued. If they are unhappy, the knife industry has no shortage of alternative options. Many of the greatest inventions have arisen from exploration and necessity. These items may be initially reserved for governmental use, but they inevitably flow down to the civilian population. The tactical knife is no different.

Understanding its versatility, various civilian industries have begun crafting specific tactical knives tailored to their field. For example, a paramedic’s tactical knife may have a rounded tip to ensure they do not inadvertently render more harm while rendering aid, while someone using a tactical knife as their everyday carry or tactical bowie knife for the outdoor purpose that may have a clip point or tanto blade with a serrated portion. As security is more of a concern for the average American and the need for utility remains as high as ever, the tactical knife can be found in the hands and lives of many Americans from all walks of life and creeds.

Since the revolutionary boom of tactical knives in the 1990s, new manufacturers have joined the ranks of those who pioneered and even named such tools. These newcomers will continue to shape and design more inventive tools that will exquisitely meet our everyday carry needs and exceed our expectations.