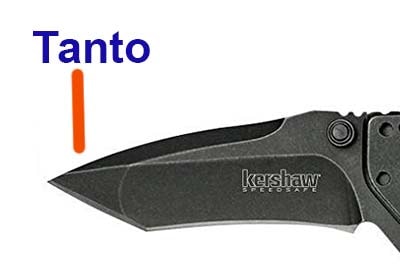 The right blade at the right time can be a lifesaver. With the yearly disaster tally increasing every year, it’s more essential than ever to find a good fixed blade knife or a pocket knife that’s right for you.

The first step for choosing a blade, for any reason, is deciding on what blade shape is best for the required job; versatility for the Everyday Carry (EDC), specifically for cutting taught zip-ties on the receiving dock at work, or a quick draw combat-ready blade for when that last shell hits the floor.

Before we discuss some of the best knife blade types and their uses, we have to cover some vocabulary first – just a few basic words and definitions so that we’re all talking about the same thing.

The simple knife is the second oldest weapon on the earth (behind the club); humans have a tendency to give everything names so there’s a word for every little dip, protrusion, and point.

Don’t get bogged down with specifics, but be prepared to run into more and keep your dictionary nearby; we’ve covered the basics and that’s enough to start a discussion.

In this article, I have compiled the most popular blade shape choices and their uses.

We begin, at the beginning with the classic knife: The straight back or “standard” blade shape. As the name indicates, this refined minimalist shape has a long straight spine with a wide blade edge sweeping back to form a pointed tip.

Effective at both penetration and slicing, this blade type provides a good, well-rounded versatility that will have input in almost any situation. As a fan of the KISS principle (keep it simple, stupid); simplicity rules.

The drop point blade shape is the most popular blade type for any folding knife or fixed blade knife. The spine leans gently forward, meeting the blade at a pointed tip around the center line of the blade.

This blade provides durability and versatility and confidence that thrusting power will reach the tip efficiently. The curved spine and blade produce a blade that’s effective at stabbing strikes. This is one of the best all-around blades and is popular amongst survivalists and hunters alike.

Almost every folding or fixed blade knife manufacturer out there has a take on the drop point, so if you want something that will stand out (or strike fear into the hearts of your enemies), this may not be the blade for you.

This blade type is ideal for deep penetration, yet subtle enough at the tip for detailed wood carving for the occasional fire-side whittler in us all. This shape gained popularity in the 1800s with the creation of the classic Bowie knife and continues to enjoy that popularity today. Entertain your friends and family by always being able to quote Crocodile Dundee: “that’s not a knife – that’s a knife.”

Starting down the path of blades with a more “tactical” appearance, we begin with the tanto blade shape. A staunchly straight spine and a blade with a steep angle give this blade a flat tip and a 45° point where it meets the spine – its aggressive lines and tactical appearance give this blade a massive potential for penetration. The larger surface yields a blade with unmatched durability that will never let the wielder down.

Worth mentioning here is the reverse tanto blade; also known as the Spey Point, it is exactly what it sounds like – the spine and blade are swapped giving a longer cutting surface.

The reverse tanto holds the pure tactical knife aesthetic while the flat blade gives a greater slicing ability at the cost of some of that penetration power. The exposed tip could be weak if the blade is poorly built, so stick with more reputable manufacturers if this is the route you choose.

The tactical blade rabbit hole deepens with the Wharncliffe blade. Few blades can trace their way back through the annals of history to the original creator – the Wharncliffe can.

Although bearing similarities to Viking Seax blades, Lord Wharncliffe is credited with this design in 1820. Though originally created for woodworking, the blade has recently taken on more angular lines and found a niche as a minimalistic combat knife.

With a steeper point angle than that of the reverse tanto blade, this retains penetration power with a larger cutting area. The result is a blade ideal for combat or daily use; if you haven’t tried one of these blades as an EDC you may be missing out.

However; due to their niche status many of these blades may be more tacti-cool than tactical, so stick with reputable knife manufacturers and traditional models rather than highly modified ones.

Moving away from the combat blades brings us to the more utilitarian blades, starting with the Sheepsfoot blade. Similar in overall appearance to the Wharncliffe blade, this stubby cousin of the older time straight razor features a forward curving spine with a long bellied blade that meets in a blunted tip.

This gives the blade a non-threatening countenance with utilitarian functionality. Putting your thumb or finger to the spine can impart remarkable cutting power while the short blade keeps the knife nimble and light. These blades are ideal for emergency medical and rescue work or if your hobbies include cutting people’s clothing off; no judgment.

Next, we have the Hawkbill blade. Perhaps the most distinctive blade in this list; it features a convexly curved blade with a spine that takes a sharp downward curve resulting in its namesake feature: an appearance like a hawk’s bill.

This blade is sure to frighten your neighbors and co-workers when you snap it out but has an unmatched utility. The curved blade is excellent at cutting and the tip has unmatched piercing strength. This blade can do every job from wire-stripping to box cutting and beyond.

This knife has traditionally been a favorite among sailors and fishermen but is creeping up in popularity among the tactical folding knives due to its unique (and frightening) appearance.

The curved blade can make sharpening a challenge, so an occasional professional sharpening may be necessary; if you are an amateur sharpener, then you must need the best sharpening system.  However, even when a bit dull, this blade is sure to do right by you.

The spear or needle-point blade will round out the category of knives with a more classic appearance. This knife features two blades that curve together to form the point – generally with a spine running up the center of the blade for added strength.

The spear shape blades may be double or single-edged depending on the specific design. These knives are built for one thing – stabbing, yet their construction and balanced edges are not ideal for cutting and daily use.

The trailing point blade shape has been hugely popular amongst hunters and fishermen. This blade looks like a straight-back blade that’s doing its morning stretches. The blade swings back above the highest point of the handle yielding a sweeping tip and an unmatched cutting surface.

Popular due to its generous belly and agility this blade is ideal for slicing, stabbing, and skinning. The exposed blade tip is the weakest point and will break if attempting to pierce hard surfaces.

The knife is, by necessity, narrow, and will serve any hunter well in the field. Also surprisingly useful for filleting fish (a fillet knife is better, but you can’t have everything), the skinner knife earns a well-deserved spot in this list.

Another blade shape for the tactical knife, the “mall ninja” crowd, the karambit is on this list largely due to novelty. This blade is similar to the hawkbill, but with a straight and typically textured handle.

The karambit distinguishes itself as a se9lf defense tool due to the wide variety of easily concealable knives, even available as necklaces. Like the hawkbill, use this knife for opening stubborn packages or cutting ropes.

The gut-hook is a blade that suits itself best for sportsmen. This is basically a clip-point knife with a narrow, sharpened hook on the backside of the blade.

This blade is most useful for larger games when the lower portion of the blade can split the skin and the hook can be used to gently cut from navel to breastbone with little to no risk of puncturing the vital organs.

As most huntsmen know, if you attempt to skin an animal and pierce the stomach or bladder, a large portion of the meat will be rendered inedible. This is a knife that is useful for the survivalist, but vital for the seasoned hunter.

Gut-hook-type tactical fixed blade knife makes it reasonably well suited for self-defense, though the hook itself does pose a hazard of potentially getting snagged.

This blade has suffered under the thumb of some politicians, with sharpened hooks being decried as potentially dangerous. To my knowledge, no jurisdictions presently ban this common, extremely useful hunting blade.

This is the first recorded blade shape. A straight tang sharpened equally on both sides with a slightly triangular point. Anyone who knows knives knows daggers.

The traditional knife of the Roman infantry, the shape actually dates back millennia, though materials evolved from stone to glass to copper to steel.

The dagger is useful for hunting, as it can be used for skin in a pinch. It is nearly perfect for self-defense, is ideally suited to both stabs and slashes.

The full tang and straight, double sharpened blade give this shape tremendous strength, and adding full or partial serrations can greatly enhance its usefulness for household chores.

Lastly, we have the kukri or Gurkha blade. This blade is long and features a thin heel with a flat edge and a distinctive recurve. The blade originated in Asia but found a home amongst militia soldiers and many armies (due to its aggressive appearance) as a battle-ready combat weapon.

After whatever conflict was over it found itself working the fields — farmers kept the blades in use due to their incredible utility: they can clear brush, till fields, and harvest vegetables.

I speak from experience when I say that there is nothing more intimidating than seeing a gang of sour-faced obaasan (grandmas) walking the streets of Tokyo wielding these and slashing weeds from between sidewalk slabs.

As one of the oldest weapons and tools, there are countless knife blade types throughout world history. Here I’ve given those that have found a continued purpose in the modern world through many different virtues. Before making a final decision get your hands on the knife you’re considering – let the feel of the blade in your hands be the deciding factor.

A weight listed on a sheet of paper is just a number, the weight in your hand is what really matters. Always remember to review local laws and regulations before purchasing as some blades and lengths may be illegal in your area.