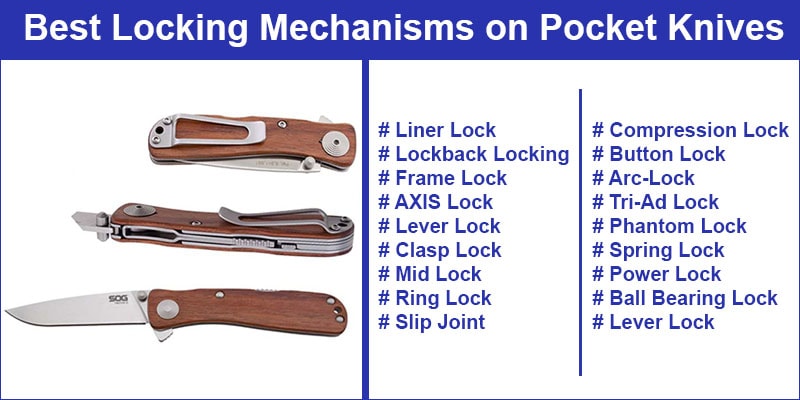 Folding knife locking mechanisms are common among good-quality pocket knives and are essential to the safety of the user. Like a fixed blade knife they keep the blade from folding back in while they are being used, preventing countless injuries. Without them, the knives would certainly be unusable or close to it. When shopping for the best tactical pocket knife, many things must be taken into account including the blade, materials used, price, and the locking mechanism used. Knowing about the different types of locks can help the buyer make an informed decision.

There are many different types of locking mechanisms with various uses, advantages, and disadvantages. The best remains up for debate among pocket knife users depending on their preferences and what they plan to use it for.

There are many things that come into play when assessing the superiority including the method used to secure the blade, what the knife is being used for, the ease of releasing the locking mechanism, and the design of the locking mechanism in relation to the pocket knife itself.

Some locking mechanisms are very simple and use pressure or a simple latch, while others are more complicated and make use of springs and buttons. Depending on the locking mechanism, one may have to use both hands to open it or it may be accessible with one hand. Additionally, it is important to take note of whether or not the lock is ambidextrous if the user is left-handed especially.

Some popular pocket knife locking mechanisms include the following:

The mechanisms used in each, as well as some advantages and disadvantages, will be explained further.

The liner lock, also known as the locking liner, was designed by Michael Walker. As suggested by the name, this lock is within the liner of the handle. Opening the blade causes the metal liner to flex and pushes against the base of the blade, locking the blade into place. It cuts down on the stress placed on the lock. This lock can be released with one thumb which makes it easy. It can be locked and unlocked with one hand. This locking mechanism is very common in Zero Tolerance Knives and all types of the best pocket knives under $30.

Lockback locking mechanisms feature a lock bar that goes across the back of the handle and is attached to both the blade and the back of the knife. This puts pressure on the blade, keeping it open. Closing the knife is done by pushing down on the part of the lock bar that is exposed, which is usually at the back of the handle. This takes two hands to do because it is out of reach of the grip, which makes it safer but more inconvenient. This type of lock is often seen in SOG Twitch II Knives, Buck hunting knives, and many top pocket knife brands.

The frame lock is similar to the liner lock in terms of the mechanism itself. This lock is also referred to as a spine lock because the spring that flexes is on the handle instead of inside of the knife, like in the case of the liner lock. Frame locks are stronger for this reason- the placement of the spring allows for a larger piece of metal that provides more strength to the lock. These locks can be used with only one hand and are seen more in the middle (best folding knife under $50) to high-end knives (best edc knife under $100).

The AXIS lock was designed around 2000 by McHenry and Williams, two custom knifemakers, and Benchmade Knife Company bought the rights soon after. Only Benchmade knives contain this particular lock. The lock itself is made up of a spring-loaded bar that goes the short way across the knife handle and locks into place when the knife opens. The spring is unique because it is shaped like the Greek letter, omega. There is a button on the handle to press that allows the blade to close. This locking mechanism works for left-handed and right-handed people and only requires one hand to use. Most of Benchmade’s AXIS lock mechanized edc knives are available under $200 price range.

Clasp locks have no actual lock or backspring; they work with a piece of strong metal at the back of the handle. They are similar to plunge locks. In order to lock the blade, one must push down on some sort of lever on the handle which inserts a post, holding the blade in place. Pushing the clasp up until the post is out of the hole releases the blade. This lever can also be a ring to pull. These knives are much less sophisticated than many of the newer technologies.

The mid locking mechanism is the same as the lockback locking mechanism mentioned previously. The only difference is the placement of the lock release- lockbacks feature the release at the back of the handle, as the name suggests, while knives with mid locks have the release in the middle of the handle. The spine is shorter with mid-locks than lockbacks because it only extends part of the way down the handle. The advantage of this over the lockback is that it results in a stronger spine that withstands more pressure.

Ring locks, also known as collar locks, have a ring that the user must twist in order to open and close the blade. This mechanism is located at the top of the handle. Twisting the ring aligns the blade with a vertical slot that it can then slide through. Twisting the ring the other way then closes the slot and locks the blade either out or within the handle. They can be adjusted by the user using pliers to loosen or tighten. Some advantages of these locks include their simplicity yet effectiveness that makes them easily manufactured. One con is that the collar can become stiff which makes the blade more difficult to operate. The ring lock is found on Opinel brand pocket knives- Maurice Opinel invented it in 1955 to be used on all of his knives.

The slip joint is not necessarily a locking mechanism because it does not lock the blade in place. Rather, it uses a spring to apply pressure to the blade. This type of knife does require both hands to use- one hand holds the knife and the other pulls out the blade. Overcoming the initial pressure of the spring is what keeps it open, but also makes it somewhat dangerous because then it swings quite quickly into place. Because of its simplicity, the slip joint is found on many lightweight pocket knives including Swiss Army Knives.

Compression lock mechanisms use a ramp and stop pin to lock the blade as well as a split liner on the spine of the blade that falls into place as it is opened. The combination of these parts makes it stronger than the similar liner lock. The compression lock is patented by Spyderco, so it is only found on their brand knives. This lock is extremely strong, easy to manipulate, and safe because your fingers will never be under the blade as it is opened and closed. It can be opened with only one hand.

The button lock, also known as the plunge lock, is very simple. Pushing down on the button releases the lock on the blade and the blade will spring open. These are traditionally part of the locking system of automatic knives. The pros of this locking mechanism include its strength and safety because the hand is out of the path of the blade. Some drawbacks include that they are difficult and expensive to make corrections and it is not ambidextrous. Knives with button locks are banned in many places; they are featured on switchblade knives.

Arc locks are an alternate version of the axis lock and are a component of the best SOG assisted opening knives as well as some of the tactical knives. This locking mechanism works with a piece of metal that is attached to a pivot that’s parallel behind a stop pin. There are curved springs in the handle that apply pressure to the piece of metal, keeping the blade either open or closed. Most versions of this lock are ambidextrous. This lock is also nice because it is easy to close and strong. One potential issue is the fact that there is more pressure placed on the springs so they are more likely to break.

The Tri-Ad lock is a variation of the lockback locking mechanism and it was designed for Cold Steel brand knives. Lockback knives often face problems caused by wear, but the Tri-Ad design features a stop pin in between the lock bar and the blade. This stop pin makes it so the lock bar does not have to apply forward tension so less wear is caused. There is also additional space around the notch in the lock to respond to wear. The sound it makes when it locks into place provides a feeling of secureness. This Tri-Ad locking mechanism is very general in different types of best tactical knives.

The phantom lock is only found on the Meerkat knife by Spyderco. The lock is not visible at first glance and releases to let the blade close when the front scale slides forward. This lock is not as strong as many others and there is a possibility that it could release under strong pressure, but it is a very unique and inventive design.

Spring locking mechanisms can have one spring or two. If there are two springs then each holds the blade at one end. Knives that feature a spring lock can be opened with only one hand. The spring lock works by applying tension as the spring opens. Many of the locks mentioned make use of springs, including power locks, arc locks, the slip joint mechanism, the AXIS lock, and frame locks.

Power locks are a variation of the lockback locking mechanism. They are found on larger Spyderco knives that require more lock strength. The lock bar would flex too much on a knife with a large blade, so a counter-rotating cam is also a component of the locking mechanism. Like most lock backs and variations, this lock is strong and ambidextrous. It is somewhat dangerous because closing with one hand requires a finger to be in the way of the blade, and there is a spring factor.

The ball-bearing lock uses a stainless steel ball-bearing within the handle. The blade is locked into place when the ball bearing wedges between the end of the knife that touches the handle (tang) and another block of metal. This is a simplified version of the AXIS lock and is used in Spyderco knives as opposed to Benchmade knives. It requires a certain amount of time to be broken in.

A lever lock is very simple and clean or maintaining the knife is easy, but using it can be dangerous. It features a lever that when pushed towards the user unlocks the blade and it comes out. The blade is then closed by pushing it in, which can be done using one hand but the hand can be caught in the path of the blade. Once the blade is closed, the lever has to be pushed forward to lock the blade in place. This lock is found on switchblade knives.

Every person has a different preference depending on what they use their pocket knife for and their comfort level. It seems that the frame lock, AXIS lock, compression lock, and button lock are the safest and strongest locking mechanisms out of the list. However, out of these four only the AXIS lock is ambidextrous (in most versions). This one seems to be one of the best choices on the market although there is a small chance that its springs or other moving parts could break.