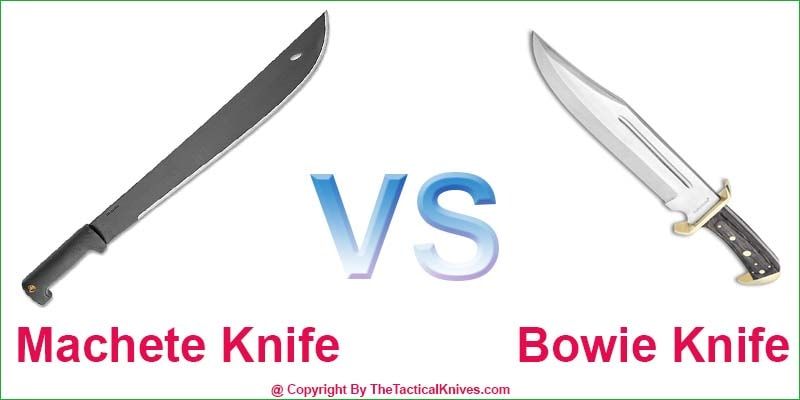 A machete is a long fixed blade knife that looks like a meat cleaver with a large blade that ranges between 13 to 20 inches long and approximately 0.10 to 0.30 inches thick. The name “Machete” comes from the Spanish word macho; its meaning resembles a sledgehammer. Among the Caribbean, a machete knife is commonly called a cutlass. A machete is a type of hybrid of a knife and hatchet.

A bowie knife is generally shorter than a machete knife. The bowie knife may be as short as five inches or as long as 20 inches, with a one and half to two-inch width. Bowie knives have a long history as a fighting weapon and are especially dangerous in close combat. While early versions of the bowie knife resembled a butcher knife, today’s version has multiple designs. The colt revolver replaced the bowie knife as the primary combat weapon in the 1870s. While the primary uses for the best bowie knives today are for hunting and survival, it is still capable of a hand-to-hand combat weapon.

A Machete Is A Farming Tool

The Bowie Knife Is A Fighting Legend

Jim Bowie fought with a knife at Sandbar and almost died from a gunshot wound, but rallied to stab a man in the heart with an early version of the bowie knife. Jim Bowie’s brother, Rezin P. Bowie, designed a new blade to provide Jim with a good fighting knife after being shot. Bowie fought with his unique knife several times, but it was his defeat at the Alamo that strengthened the legend of the bowie knife.

The first bowie knife was between nine and ten inches long and around one inch and a quarter wide. The bowie knife did not have a curved blade, like the more modern version. Bowie is a legendary fighter that primarily used his knife as his primary weapon. Bowie bravely fought at the Alamo, despite being severely injured and sick.

Two fictional characters fight with the two weapons that are the focus of this essay. In the movie First Blood, John Rambo’s only weapon is a bowie knife. Rambo is a Vietnam veteran returning to America after the war to find that harassment meets him at every turn. Local law enforcement attempts to chase Rambo out of town, but he refuses to leave and becomes a hunted man. Rambo uses camouflage and forms traps with his long tactical fixed blade knife in the woods of Washington to defeat his attackers. The police continue to track Rambo, and he survives the constant assault from superior weapons and manpower.

Machete is the nickname of a Mexican hitman who brutally kills people with a machete. Machete is an expert in hand-to-hand combat. While the character has his introduction in the Spy Kids Franchise, he becomes a star in the movies Machete and Machete Kills. Machete uses his weapon to kill hundreds of his enemies.

The question to consider is that if Rambo fought Machete, who would win? The key to answering the great Rambo versus Machete debate is discovering which of their weapons is most effective in hand-to-hand combat.

The Machete as A Weapon

In 1762 Cubans fought against the British utilizing the machete as a weapon. The blade’s size is intimating, which allows the user to scare potential threats away before the battle begins. The blade is also heavy-duty, which makes it durable and unlikely to break when using it as a fighting weapon. This heavy-duty weapon can cut through muscle and bone. A machete knife provides better reach than a bowie knife due to its long blade.

The bowie knife is useful for keeping enemies at bay and neutralizing the damage from their opponent’s shorter weapons. The machete is easier to use than a bowie knife and allows a person unaccustomed to fighting to be dangerous in hand-to-hand combat. A machete is easy to deploy in battle as it may already be in hand, or the user can quickly withdraw it from its sheath. A machete can disable an opponent by severing limbs while maintaining the ability to slash and cut.

There are several disadvantages to using a machete knife as a weapon in hand-to-hand combat. The machete is difficult to conceal, making it impossible to carry for protection. It is easier to disarm an opponent using a machete than when using a bowie knife. When using a machete the user must take wide swings at opponents, which gives the opponent too much time to react and strike first.

The machete is challenging to use in close and tight spaces. It is easy to parry a machete with a baton or a stick. The bowie knife is a better weapon for piercing. When exploring historical examples of armies utilizing the machete knife as a combat knife, they traditionally lose against enemies using conventional weapons.

The Bowie Knife as A Weapon

In the early nineteenth century, the bowie knife was the primary fighting weapon. The main feature of a bowie knife is the clipped point that allows for greater stabbing and piercing action. The sharp false edge at the back of the point allows for an effective backslash.

The legend of the bowie knife began when Jim Bowie killed two men in a fight at Sandbar with his famous knife. By 1830, The bowie knife was in common usage among Americans. Before guns became reliable weapons, people primarily utilized bowie knives for self-defense.

By the 1850s, firearms were effective weapons, and people commonly carried a gun and a bowie knife. Wyatt Earp in the 1870s stated that the majority of gunfighters still wore a bowie knife but used it as a survival tool and not as the primary offensive tactical knife. In the 1880s, the popularity of the bowie knife began fading.

In the 1940s, the bowie knife began making a comeback when G.I.’s started using it in the jungle during Work War II as a personal defensive tactical knife. The army found that issuing bowie knives to soldiers boosted their morale and increased their ability to kill in hand-to-hand combat. Several soldiers survived their capture by killing their enemies with their bowie knife and using it as a survival tool during their escape.

In the 1960s, the Air Force added sawteeth to their bowie knives to help tear through canopies or acrylic glass. Bowie knives are a standard issue among all military branches, proving their effectiveness for fighting and killing.

Which Is Better for Fighting: Bowie Knife or Machete?

Bowie knives are thicker than machetes, which makes them more durable and provides the strength necessary to cut through muscle and bone without breaking. Machetes are effective knives for the cutting off of body parts, but since it is not the original design, it is more likely to break.

Machetes are popular among countries that have ready access to these weapons due to their farming nature. Military forces with the financial capacity to choose and design weapons for their soldiers decide to provide them with bowie knives and not machete knives. The handles of bowie knives have clips and the design to avoid slipping or losing control of the tactical knife in a fight.

Machete handles suffer from slipping quickly from the hand when being utilized as a fighting knife. The bowie knife is specially designed for use as a hand-to-hand combat knife. The machete’s primary purpose is as a farm instrument, cutting sugar cane, limbs, or tall grass. The machete knife has multiple uses, including an offensive combat weapon.