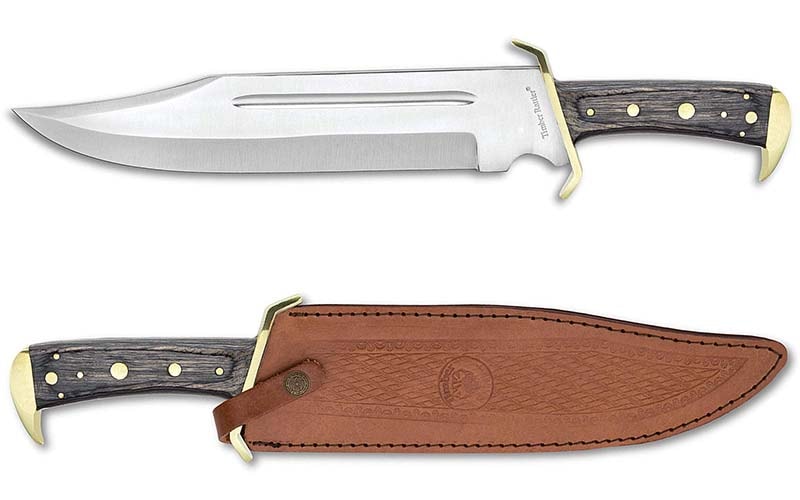 Most people have heard of the Bowie knife. Some know its shape and might even be familiar with its connection to Jim Bowie.

However, do you know the shocking, gruesome story of the fight that brought the Bowie knife to the public’s attention?

Do you know the story of its meteoric rise and steady decline in popularity on the American frontier?

The Bowie knife has a fascinating history that too few people understand. Read on for a taste of the quintessential American weapon’s history.

There can be no discussion of the Bowie knife without an introduction to the first Bowie knife owner, the man who lent his name to the blade: Jim Bowie.

Bowie was a 19th-century American folk hero. He was born in Logan County, Kentucky in 1796, though he grew up in Missouri and Louisiana.

In 1836, he died at the Battle of the Alamo in Texas. His heroic death on the American frontier cemented his place in American folk history.

Well before his death, however, Bowie was making headlines.

In 1826, Jim Bowie was living in Louisiana with his brother Rezin. Jim and Rezin were successfully running an illegal foreign slave trade business. This business was highly profitable, and soon the brothers involved themselves in land speculation.

As their business ventures grew, in order to continue his speculation, Bowie needed a loan. Norris Wright, sheriff, and banker denied Bowie this loan.

Because of this, Bowie publicly supported Wright’s opponent in the sheriff’s election. As a result of these disagreements, tensions ran high between the two men.

One day, Wright shot at Bowie while Bowie was unarmed. Bowie attacked in retaliation and the two men fought in hand-to-hand combat. There was no clear victor.

After this incident, Rezin had a knife made for Bowie. He wanted Bowie to have a knife that was strong and could be carried at all times for personal protection. The knife was large, similar in size and shape to a butcher’s knife.

Though Rezin and Jim did not know it at the time, this knife would someday be recognized as the first iteration of the Bowie knife.

In 1827, Samuel L. Wells III, a friend of Bowie’s, arranged a duel with Dr. Thomas H. Maddox because of a long family feud. The duel took place on a large sandbar in the Mississippi River near Natchez, Mississippi.

Bowie attended the duel as Wells’s second. Wright was in attendance on Maddox’s side. Wells and Maddox each fired twice, but neither hit their targets. The conflict was resolved with a handshake.

Despite this resolution, fighting broke out between the supporters of each dueler. This bloody, lethal brawl would become known in the papers of the day as the Sandbar Fight.

When the fighting broke out, Bowie was targeted and shot in the hip. A second shot intended for Bowie missed and killed an innocent bystander.

After being shot, Bowie returned to his feet and charged at his assailant. Bowie was then hit in the head with a pistol, breaking the gun and causing Bowie to go crashing back to the ground.

Taking advantage of his adversary’s weakness, Wright charged the supine Bowie and stabbed him in the chest with his cane sword.

Ignoring the sword that was still in his chest, Bowie lifted himself off the ground, drew the knife Rezin had given him for protection so many months before and disemboweled Wright.

Wright died while Bowie, who had sustained a total of a dozen serious injuries, including bullet and stab wounds, survived.

The dramatic tale of this unexpected brawl and Bowie’s miraculous survival spread like wildfire through the national papers. As a result of this coverage, Bowie became a national legend.

Before long, hunters and frontiersmen were asking knifemakers across the country to craft them a knife “like the one Jim Bowie used.”

Despite the immense popularity of the Bowie knife after the Sandbar Fight, little is known about the original Bowie knife.

Historical records are sorely lacking partly due to the time period and partly because, prior to the widely reported Sandbar Fight, there was no reason to keep a record of the original knife Rezin designed for his brother.

Despite this inevitable historical uncertainty, claims have been made about the original Bowie knife.

The original is said to have been nine and a half inches long, a quarter of an inch thick, and an inch and a half wide. It was straight-backed and described by witnesses to the Sandbar Fight as a large butcher knife. It had no clip-point or handguard, though it did feature a riveted wood scale handle.

Its overall shape, including its lines, resembled some of the Mexican knives in use at the time and demonstrated the Mediterranean influence sweeping through the southern United States at that time.

As the popularity of the knife skyrocketed, Bowie and his brother began commissioning more ornate, custom blades from a variety of knifemakers. In fact, Bowie knives became so popular that even English bladesmiths began producing Bowie knives to be sold in America!

This shape lent itself to the Bowie knife’s supremacy as a hunting knife. It could be used for both skinning and butchering games: the curved part could be used to skin an animal, while the straight part could slice the meat.

The Bowie knife also filled a need of time. It was a convenient, close-contact weapon. The Bowie knife was small enough to be worn. Unlike other popular swords of the time, like the saber, it was short and easy to transport. Its blade was also heavier.

You might ask why a convenient knife was necessary. If someone felt the need to carry a weapon for protection, why not carry a gun? Surely a gun would be more useful in a wider variety of situations?

However, it is important to remember the guns of the early 19th century were notoriously unreliable. Handguns often misfired.

In a life-threatening situation, therefore, it was vital to have a usable weapon available. As one of the best military knives of that time, the Bowie knife was a good choice to fulfill this need.

The improvement in the reliability and accuracy of handguns, in fact, was an important factor in the decline of the popularity of the Bowie knife.

Bowie Knife Through the Years

In the 1830s, several states attempted to ban the Bowie knife due to public concerns about its lethal potential.

In fact, in 1837, the Speaker of the House in the Arkansas House of Representatives killed another legislator on the floor… using a Bowie knife!

However, legislation was difficult to enforce and the popularity of the Bowie knife continued to swell throughout the 1840s.

In 1846, when the Mexican-American War began, the Texas Rangers added the Bowie knife to its list of necessary equipment. In the 1850s, the popularity of the Bowie knife peaked.

During the Civil War, Confederate soldiers relied heavily on the Bowie knife. However, over the course of the war, guns with mounted bayonets gradually replaced the Bowie knife.

By the end of the Civil War, the Bowie knife’s popularity had diminished, and by the 1870s, it was viewed only as a hunting knife.

The most important factor in this abrupt decline was the breakthrough of the Colt handgun. Unlike earlier handguns, Colt handguns were efficient and reliable. With a gun less prone to misfire readily available, it was less important to carry a backup weapon.

Much later, in the 1940s, the Bowie knife made a partial comeback. During World War 2, the United States military provided its soldiers in the Pacific theater with Bowie knives to help them navigate the jungle.

This turned out to be a wise tactical maneuver—Bowie knives were found to be excellently suited to this purpose and were also highly effective as weapons for hand-to-hand combat, as Jim Bowie demonstrated a century before.

Even after losing other heavy equipment, soldiers found it easy to retain their Bowie knives for protection.

Today, though they may never regain their former popularity, Bowie knives can be both an invaluable tool and a sought-after collector’s item.

With the versatility afforded by their design, Bowie knives can be used for a variety of outdoor activities, including hunting and camping.

As collector’s items, early Bowie knives can be beautifully crafted pieces that can connect their owner to a piece of American history that is too often forgotten.

From its initial popularity following the news of Jim Bowie and the Sandbar Fight to its rising importance on the American frontier to its decline following the Civil War and the improvement of handguns, the Bowie knife has a long and storied history.

Throughout this history, it both has been and remains a quintessentially American symbol of self-reliance and strength.