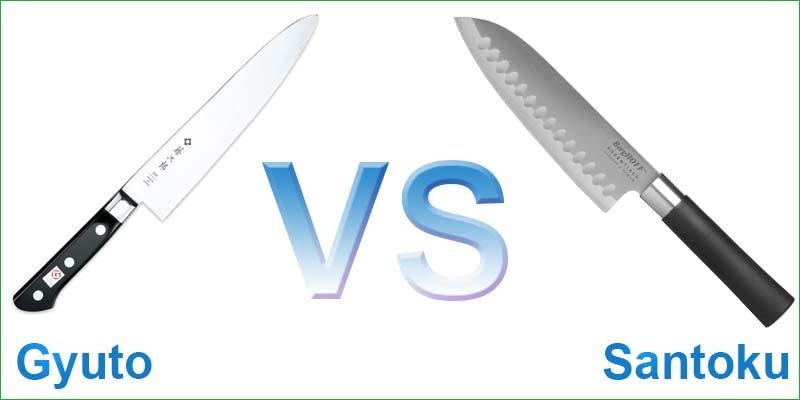 All the best gyuto knives and santoku knives are popular Japanese-style kitchen knives that have been around for a long time and remain as popular today as when they were first created. They are incredibly useful in the kitchen, popular sushi restaurant, and effective to use for all sorts of cooking. Also, some sushi chefs use these knives in their restaurants as part of the sushi knife set. However, there is some debate about which type of knife is more useful and what the actual differences are between gyuto and santoku knives.

These knives are both used in similar ways, though one is slightly more versatile than the other. Both knives look incredibly similar, particularly at first glance, and even have similar uses. However, when you take a second closer look at gyuto knives and santoku knives there are clear differences.

In this article, I hope to teach you about the history and basic structure of these two types of knives while also teaching you how to tell the differences between them.

Gyuto vs Santoku – Origins and Meaning

The gyuto and santoku knives, while sometimes used interchangeably, are not the same knife. While gyuto knives have origins in Eastern Europe and the santoku in Japan, both are used worldwide.

The gyuto knife was given its name after its importation into Japan. Almost identical to a chef’s knife, and used for cutting pieces of meat, the gyuto name literally translates to “Cow Sword”. It was considered impressive to use this knife to cook beef in Japan, whose diet mainly consisted of rice, vegetables, and fish, due to its island status and minimal farmland.

The santoku, native to Japan, was a “new take” on the nakiri, which was mainly used for vegetables. It was almost a balance between the nakiri and gyuto, which some people felt was too different from the nakiri and hard to use. The name santoku is meant to translate to “Three Uses”. These three uses are implied to be vegetables, fish, and meat.

Gyuto vs Santoku – Shape and Size

In today’s society, these two knives are sometimes used for similar tasks. The shapes of the blades are also similar. The slight differences are noticeable, but only when looking for them.

The gyuto has a longer blade than the santoku, extending up to and past eleven point eight inches, or three hundred millimeters. This knife also has a lesser curve along the spine to the point, resulting in a sharper tip. The edge is more curved than the santoku, and can often be more conducive to rock cutting motions. Due to the overall larger size of this knife, the gyuto tends to appear heavier than the santoku to its users.

The santoku knife, designed to have a high number of uses, has an extremely versatile blade shape. Rarely longer than seven inches or one hundred and eighty millimeters, the santoku is slightly shorter in length than the gyuto knife, the santoku knife has a more turned down shape along the spine to the tip. This is known as a “Sheep’s Foot” blade shape. Because of this shape, it has a less sharp tip. The edge also tends to be less curved than a gyuto knife, allowing it to be more effective in chopping motions. There is a possibility that this smaller size of the knife is intended to better fit the Japanese people’s hands, which are on average smaller than their western counterparts. Japanese households also tend to be smaller than western homes, making it harder to handle a nearly foot-long blade.

Gyuto vs Santoku – The Finer Points of Design

Like many Japanese blades, this knife has both a full tang and half tang handle. The half tang makes the handle lighter in comparison to the blade and moves the balance point farther towards the tip of the blade. This then makes a pinch grip the desired grip to use when handling the gyuto knife. The tang is often concealed in the handle, not placed in between two halves of the handle. While making the knife lighter, it also has the effect of a more aesthetically pleasing look. The heel of the blade is at a ninety-degree angle, allowing the user to chop harder objects, such as pumpkins, chicken, or watermelons. Typically, the spine will be around two point five millimeters wide at its thickest point, making it slightly thicker than a nakiri knife and thinner than a meat cleaver. The blade itself is of western descent and is represented by its double beveled blade.

The santoku knife is often designed without a bolster and will have “scalloped” sides, keeping a more equal thickness in the distance between the spine and blade. Often the blades will have a twelve to fifteen-degree angle on the shoulders, which is much more extreme than a typical twenty to twenty-two-and-a-half-degree angle seen in a classic kitchen knife. This double bevel is intended to increase its versatility in comparison to the typical single bevel of Japanese blades.

Gyuto vs Santoku – Uses of the Knife

The gyuto knife has a large number of uses. To the average home chef, this knife could be used for most home applications. However, This knife should be kept away from attempts to cut through frozen objects or bone, as this can chip the edge. This being known, it is possible to use this knife to separate joints or filet cuts of meat or fish. The advantage of the knife is that the blade shape can support the rocking motion which is efficient for cutting through harder vegetables or sweet potatoes.

The santoku knife, true to its name, was designed for three main uses: vegetables, meat, and fish. It was intended to be a take on the concept of a “Jack of all trades”, as these were most prevalent in Japanese households. Like the gyuto knife, the average home chef could easily use the santoku for many other uses as well. However, it should be kept away from frozen objects and bones, as there is a risk of chipping the blade. Designed for slicing, rather than rock cutting motion, this knife is also commonly used for slicing cheese as well. Chopping or dicing vegetables is one of the original intentions of this knife, and this still holds true. Fine slices in seafood are also possible with this knife. The “Three Uses” aspect of the knife was created in an attempt to give any chef, from first-time home cook to professional, a utility knife that could be applicable in many situations, simplifying and reducing the number of knives needed for a task.

Gyuto vs Santoku – Care For the Knife

Although the durability and lifespan of the gyuto knife are often dependent on how it was made, the materials used, and the skill of the user, there are some basic concepts to keep in mind. Making sure to make cutting motions as straight as possible, without twisting motions, is important to keep the knife from experiencing unnecessary torsion. This knife should not be used on a Glass cutting board, which can damage the blade. The gyuto knife should not be placed in a dishwasher. Instead, use warm water and a mild detergent, especially if the handle is natural wood. Sharpening the knife is largely dependent on how much use it gets and the material used for the blade, but regular maintenance is always recommended.

Like the gyuto knife, the care for a santoku is directly related to the knife’s make, material, and usage. The recommendation is to use a Japanese Waterstone for sharpening, although it is possible to use fine ceramic steel intermittently. It would be a smart decision to send the knife to a professional knife sharpener who has a variety of knife sharpening systems. If the steel of the blade is a high carbon, placing a layer of camellia oil on after washing and drying will help to protect the blade from rust, corrosion, and discoloration. Because Japanese knives tend to be thinner than their European counterparts, they are known to chip easier.

Gyuto vs Santoku – Which is Right for Me?

Aside from use, some knife collectors and users look for certain aesthetics in their tools. For those that are searching for a larger knife, which has more western roots, then a gyuto would be the knife for you. If it is a smaller, traditionally Asian knife that you are searching for, then you should go into the market for a santoku.

In terms of use, the knife you buy should be based on your needs and habits. If you were trained to utilize a rock-cut when preparing foods, then a gyuto would be the recommended tool for you. Meanwhile, those that favor a slicing, or push cutting technique that is popular in eastern culture when cutting meat, fish, or vegetables, will find that a santoku knife is more suitable for their needs.

In terms of care, both knives require similar amounts of attention and will be based on the blade material you choose. It goes without saying that a larger knife would be more akin to larger jobs, be it for the size of an object or amount of food. A taller knife will also provide more stability during use.

If you use the tip of your knife to do food prep, then having a narrower point on a knife such as the gyuto will fit you better. For example, using the final few inches of the blade to trim the interior of a bell pepper would be much easier than with the sheep’s foot design of a santoku. Trimming sinew off of a cut of meat would also be more efficient for a gyuto than a santoku.

For most chefs that spend a large amount of time preparing food, it would be wisest to get both knives. However, a home chef will be more than able to handle a day-to-day task with one or the other. It becomes a personal choice, based on needs, demands, and personal wants. The easiest way to find a knife that works for you is to try multiple versions of each knife and continue independent research as to the pros and cons of each blade.