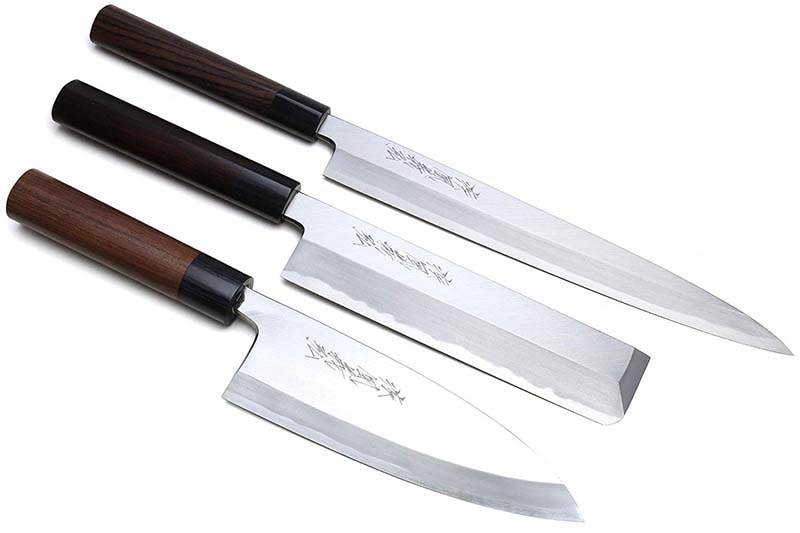 Many people have used knives throughout their life. For many, it is an essential tool that can be used in different settings such as the kitchen, the outdoors, etc. Specifically, in the kitchen, it can be frustrating for someone who cooks to have a knife that just does not do its one job: cut.

When using a subpar knife, one can find themselves frustrated by the knife slipping on the ingredient or the knife crushing the food instead of cutting. There is the chance that the knife simply needs to be sharpened with the best sharpening system, but the knife itself could also be unsatisfactory or defective.

To solve the issue of a faulty knife, I recommend looking into Japanese chef knives. Made from traditional Japanese blacksmithing techniques, Japanese kitchen knives are created with high-quality craftsmanship and materials. In this article, I would like to highlight some of the most popular types of Japanese chef knives that can help solve these annoyances.

The Yanagiba knife is a specialized knife meant to slice boneless fish fillets for dishes such as sashimi and sushi, making it an essential tool for sushi chefs. Most of the best Yanagiba knives are also capable of filleting and skinning small to medium-sized fish as well as cutting large pieces of meat. This knife is capable of such tasks due to its long (usually 240mm-360mm) and thin blade as well as its acute edge that makes slicing through ingredients effortless.

The long blade especially helps by making it easier to cut fish in one single, long slice as opposed to a push and pull cut. But what truly makes the Yanagiba special is its heavier spine which allows gravity to take care of the downward force when cutting delicate fish as well as the blade’s slightly concaved back which gives the knife a special non-stick property. These characteristics are what make the Yanagiba knife an essential tool for sushi chefs all around.

The Gyuto knife also known as the “cow sword” when translated into English is a versatile chef’s knife. This special Japanese chef knife was created hundreds of years ago when the ban on meat-eating was removed in Japanese culture. Although the name “cow sword” was derived from the history of the knife’s creation, its versatility makes it suitable for all types of prep work.

The Gyuto knife is known for its thin blade, flat edge profile, and for being lightweight. Due to Gyuto’s flat edge, it is valued for its amazing push-cutting capabilities. Japanese chefs tend to seek out the good Gyuto knife when first starting their knife collection since it can do just about everything when it comes to cutting. If you are looking for an excellent day-to-day knife for fish, meat, and vegetables, the Gyuto is something worth looking into.

Similar to the Gyuto knife, the Santoku knife is also known for its versatility as an all-purpose knife. The Santoku was created as an alternative to the Nakiri knife (traditional vegetable cleaver). The Santoku retains some aspects of the Nakiri knife such as its height and straight edge but differs in that it has a “sheep’s foot” tip which forms a gentle point.

This knife is primarily used to cut vegetables, meat, and fish which inspired the name “Santoku” which means “three virtues” in Japanese. One aspect of the Santoku knife that appeals to many chefs is that it is shorter (typically 160-180mm) than the Gyuto knife and other Western-style counterparts which makes it easier to commit to as opposed to buying a larger, wieldy knife. Most kitchen tasks can be accomplished with the Santoku knife which makes it a great multi-purpose chef knife.

As mentioned before, the Nakiri knife is a traditional vegetable cleaver. The Nakiri is created with an extremely thin blade and squared tip which makes it the perfect knife for creating paper-thin vegetable garnishes. Due to its flat edge, the blade is meant for push and pull cuts and reduces the chance of accordion vegetables, which are vegetables that are still connected even after being cut.

Those who own the Nakiri knife tend to buy the 165mm and 180mm sizes. One aspect of this knife that makes it special is that, unlike the Gyuto and Santoku (non-rectangular blades), Nakiri knives do not become significantly shorter in length even after being sharpened repeatedly. The Nakiri is great for those who want a specialized vegetable cutting knife and do not need a sharp tip for precise work.

The Deba knife is similar to the Yanagiba knife in that it is used to cut fish but more so resembles a cleaver. The Deba is often used to butcher and fillet whole fish in Japanese fish markets and restaurants. The blade is thick (up to 9mm) and has a heavy spine which helps complete difficult tasks such as chopping off fish heads and making strong cuts. The Deba knife has a unique shape that allows the user to use each part of the knife for a specific purpose. For example, the heel is used to cut small bones, the center of the edge is used for slicing, and the tip of the knife assists in deboning.

Since the Deba is a heavy-duty knife (ranging from 165-210mm long), it can be used on meat as well but should not be used for cutting meat bones other than chicken. Users must take caution because the blade could be subjected to chipping. The Deba knife is common amongst the popular three-knife collection which consists of the Deba, the Nakiri, and the Yanagiba.

Similar to the Nakiri knife, the Usuba knife which translates into a “thin blade” is used for vegetable cutting. It caters to those who want to slice ultra-thin vegetables with methods such as julienning, rotary peeling, dicing, etc. The thin blade is designed to cut through vegetables without crushing their cells, which helps reduce discoloration and loss of texture which is valuable in Japanese cuisine.

Unlike the Nakiri, the Usuba knife is more difficult to use due to its single-bevel (ground and sharpened on one side), which requires more skill. The single bevel and sharp edge make the Usuba the tool of choice when it comes to creating precise and thin cuts for vegetable garnishes. The Usuba is generally a little bit heavier than their Nakiri counterpart due to its thicker spine.

There are two different types of blade tips that the Usuba knife has based on region. Some Usuba knives are created with a square tip (Azumagata-Usuba) while others come with a rounded tip (Kamagata-Usuba), either way, they perform the same. The most popular sizes of the Usaba are 180mm and 210mm. The Usuba knife complements the skills of those who have worked in the culinary industry.

The Sujihiki knife is the Japanese counterpart to Western-inspired slicers. It is a long, thin, and double edge slicing knife that allows for smooth slices through proteins such as meat, fish, and poultry. It is also useful when slicing terrines and patés. They are made to be thinner and shorter than chef’s knives to reduce friction, allowing for effortless strokes without crushing or slashing ingredients.

Suijhiki knives tend to range in length from 210mm-360mm. Although there is a large range of sizes, 240mm, 270mm, and 300mm are popular amongst cooks. The Sujihiki knife is an accessory to other Japanese kitchen knives and applies the finishing touches to a dish.

The sword-shaped knife has a straighter edge when compared to the Yanagiba knife for cutting vegetables. It also has a longer blade as opposed to the Usuba knife for slicing proteins effortlessly. These knives are known to be difficult to use and are generally only used by highly skilled and experienced chefs in Japan.

The Bunka knife when roughly translated means, “convenient knife.” This means that it is a multi-purpose kitchen knife that can be used for meat, vegetables, and fish. The blade is thick enough to cut meat and fish while remaining thin enough to easily process vegetables.

It is similar to the Santoku and Gyuto in that it is versatile, but has a thicker spine and more pointed tip (K-tip) that helps it excel in precision cutting, heavy chopping, and chopping at the heel of the blade. Bunka knives are not very common and are usually made in small batches which makes them harder to get.

The Petty knife is a smaller version of the Gyuto and is used by Japanese chefs when crafting delicate masterpieces on fruits and vegetables. It can act as a paring knife in that it can be used without a cutting board when cutting off ends and peeling. Petty knives tend to range in size from 120mm-150mm, which makes them larger than usual paring knives as well as smaller than the similarly-shaped Gyuto.

Its compact size and thin blade result in a light and controllable knife which makes it ideal for creating precise cuts. Some beginner chefs will buy the Petty knife because they find it less intimidating than the wieldy Gyuto knife. This accurate and versatile knife is a wonderful kitchen accessory for those who need to do small, delicate work that a larger knife cannot handle.